How to Buy in Vancouver

It is impossible to think about buying in Vancouver as a foreigner without considering the now- infamous tax on foreign buyers and speculators introduced in 2016 to make housing in the region more affordable and cool down an extremely hot market.

In Vancouver, foreigners pay a 20% tax on top of the purchase price. The tax was introduced because of the perception that Vancouver, the most expensive market in Canada, was becoming a parking ground for global capital.

Now approaching the end of the second year, many say the tax has not had its intended effect. Jerry Wang, of MacDonald Realty, a luxury brokerage in Vancouver, said that although the tax slowed the market at the beginning, foreign buyers are back in the game.

The largest island offers proximity to a 180-mile long For the luxury “Buyers can get a mortgage fairly easily, and relatively speaking, the price point for the Vancouver area is still very reasonable,” Mr. Wang said, compared to other large cities around the world.

He said his clients have just shifted to a slightly lower price bracket to account for the tax, and are still “buying at a discount.” They also still buy at the high end. “This year we have seen so many properties over C$10 million (US$7.7 million) sold in Vancouver,” he said. “Most of them are to Chinese families still wanting to be here.”

Because of the tax, he added, it is “properties in the middle that are suffering,” referring to those in the “affordable luxury” range. 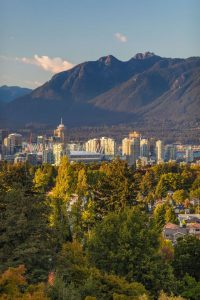 “The first step is obviously to find the right realtor,” Mr. Wang said. He explained that many of his clients already have schools set up for their children and are coming to Vancouver for that reason, but they still need to find homes. Many people find their broker by word of mouth. He estimates it takes a month or two for most buyers to find a property.

Buyers tend to go online initially “to get a feel for the market,” said Ruth Hanson, a broker with Sotheby’s International Realty Canada. She said many buyers meet with multiple brokers on the first visit in the community they are interested in, in order to narrow down the neighborhood and then the property.

Buyers are not legally required to work with brokers but it is recommended, and they do not pay a fee to brokers.

The housing stock in Vancouver is extremely varied, and buyers (along with their brokers often) need to decide what they are looking for, whether that’s “a deluxe penthouse with 360 views views or a house with land close to the university, Ms. Hanson said.

Once the house has been selected and the offer accepted, according to Ms. Hanson, a 5% deposit is used to bind the contract.

She said buyers should have a good chunk of money in one of the country’s Canadian banks for at least six months before they purchase. According to Ms. Hanson, foreign buyers are often required to show a reference letter from their primary bank, a possible credit report and evidence of the opening of their Canadian bank account.

They need to be there in person to sign mortgage documents.

In some cases, there’s a minimum 20% cash down payment that needs to be held in a Canadian bank for at least 90 days, and sometimes an additional “net worth” evidence of ability to pay mortgage.

The mortgage broker, often suggested by the realtor, must be in Canada, and the buyer must be there in person to sign the mortgage documents. Supporting documents for a mortgage in Vancouver include a copy of the purchase contract, employment verification and documents confirming the down payment. Once a buyer has an accepted offer, the lender will review documents, require an appraisal on the house and approve the financing. The mortgage instructions are sent to the client’s lawyer. Attorneys recommend two weeks from the receipt of instructions to the completion date of the sale. In addition to a lawyer, many people hire an  accountant to help the navigate the taxes

On completion of the sale, the buyer must pay the Property Transfer Tax to British Columbia,  according to Ms. Hanson. It is calculated at a rate of 1% of the purchase price for the first C$200,000, (US$77,007) plus 2% of the balance up to C$2 million (US$1.54 million) and 3% for the balance over C$3 million (US$2.3 million), plus an additional 2% on the balance greater than C$2 million because the property is residential. There is also the foreign buyers tax of 20% on the total purchase price.

Once you own the home, there are additional annual property taxes and school taxes on homes over C$3 million. For homes between C$3 million and C$4 million (US$3.09 million), there’s a tax rate of .2% on the residential portion of the home. Homes over C$4 million are taxed at .4%.

If you are going to be leaving the house vacant, there is also a vacant home tax if the house is unoccupied for more than six months, of 1% of the assessed value, and a speculation tax in the city of Vancouver.

Still, with the right help, the process is straightforward. “I have to say if anything surprises them [buyers], it is how simple it is to purchase properties in Vancouver,” Mr. Wang said. “In Canada it is all very regulated, with the different parties and happens very smoothly.”

The process moves quickly too, and buyers can often close as soon as two months after putting in the deposit, according to Mr. Wang.

The article was originally posted on Mansion Global. Written by Ariel Ramchandani.