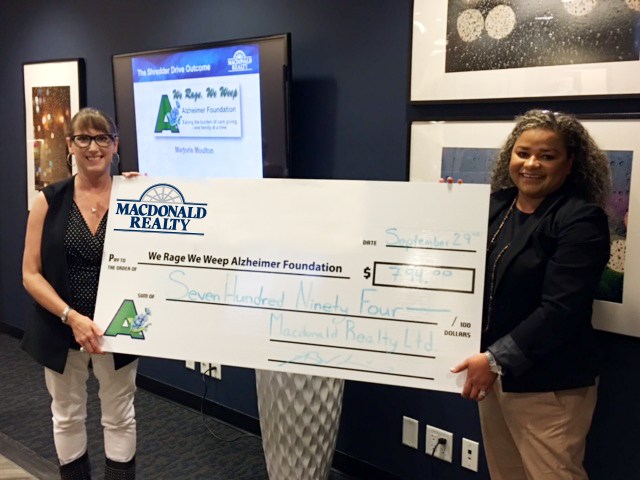 Macdonald Realty Victoria is excited to make a donation to We Rage, WE Weep Alzheimer’s Foundation, a fantastic local charity providing support for families and caregivers of Alzheimer patients.  They provide tracking devices that help with wandering patients, most of which are then located within 15 minutes. 100% locally run by volunteers, ever dollar raised goes back into the community.  Our Victoria office raised $794.00 raised during their 1st annual Shredder Drive & BBQ back in June.

We are delighted to announce the begin

ning of a new charitable partnership between Macdonald Real Estate Group and InspireHealth, a local not-for-profit supportive cancer care organization with centres in Vancouver, Victoria and Kelowna.  They provide important programs and services to enhance quality of life, health and well-being of people living with cancer and their families.

Last year, InspireHealth welcomed more than 2,400 new members, provided 2,000+ classes and more than 25,000 patient visits – all completely free of charge.  This InspiredHealth cookbook is an important fundraising venture and we are so proud to be a leading sponsor of this project. Watch for the cookbook is stores this holiday season and if you wish to make a donation to the project you can ​visit their Kickstarter page here.

October 11th to 17th marked this year’s Homelessness Action Week in Greater Victoria. Imagine yourself experiencing poverty, down to your last few dollars of the month and you need to make a choice between food for your family, or toilet paper. Guess what? Food always wins. This means many individuals and families in Victoria actually greatly appreciate the luxury of toilet paper. Something we flush down the toilet every single day can literally change lives. TP the Town aims to raise 50,000 rolls of toilet paper for people in need.

Here Tracey shares their experience:
“My colleague Dane & I got out there early this morning to collect rolls of toilet paper – yes you read correctly – to support Homelessness Action Week in Victoria. Last year over 48,000 rolls were raised, and together we are hoping to reach 50,000 this year. A HUGE THANK YOU!! to all the households that donated – we applaud you. Something as simple as TP that we take for granted everyday is a luxury for many folks. And when it comes to making budget decisions as the month nears its end – food always comes first. Big thanks again to all of our donors…Dane & I picked up over 400 rolls of TP this morning!”

Stay tuned for more spotlights on our REALTORS® active in British Columbia communities!

In lieu of cards or gifts this Christmas, Macdonald Real Estate Group (MREG) will be making a financial contribution to the British Columbia Heart and Stroke Foundation.

Many families across Canada are impacted by heart disease, and in the last few years MREG has been affected in several distinct ways. Firstly, two of our long-time managers had major heart surgery; thankfully, both are now recovered and living active lives.

Secondly, on two separate occasions, agents in the Macdonald Realty Victoria office were able to administer life-saving CPR to clients who suffered massive heart attacks. We are thrilled that as a company we were, in the words of the Heart and Stroke Foundation, able to help ‘create more survivors’.

Our contribution will specifically go to support research and education in British Columbia.

If you would like more information about the work of the BC Heart and Stroke Foundation, you can visit their website heartandstroke.com.

In lieu of cards or gifts, Macdonald Real Estate Group will be financially supporting cancer research and patient care through the BC Cancer Foundation and InspireHealth.

InspireHealth is a BC not-for-profit which provides integrative care for individuals with cancer.  Their team of doctors, nutritionists, counselors, and exercise therapists focus on the spiritual, emotional, and physical health of patients as they go through traditional cancer treatments like Chemotherapy.

InspireHealth’s cancer care model serves to complement standard cancer treatments.  It helps prepare the individual for the anxiety and emotional complexity that can be major factors when facing a life-threatening illness.  While the cancer itself is treated, InspireHealth ensures that other aspects of the patient’s health – like diet and exercise – are supported.

If you would like more information about InspireHealth you can visit their website or Shelley Ross at sross@inspirehealth.ca.