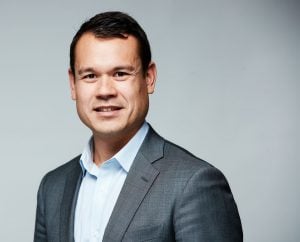 “Dan has demonstrated strong leadership and business acumen, both in our operations in Canada and our successful office in Shanghai, China,” said Lynn Hsu, CEO. “Many of Dan’s strategic decisions over the past 10 years have been instrumental in getting us to where we are today.”

“I’m excited to continue working with our talented group of managers, staff, and agents in what is our 75th anniversary,” said Scarrow. “I will be working hard to help us maintain our status as British Columbia’s premier real estate brokerage and consultancy firm.”

Since joining the company in 2006, Dan has held several roles, first as a successful residential agent, selling over $50 million in his first year in sales, and then moving to commercial and earning an Award of Excellence or Sales Achievement Award in each of the following 4 years. In 2010, Dan moved to the management side as VP Operations, helping the company expand during that period. Most recently, from 2014 – 2018, he moved to Shanghai, China, opening and running Macdonald’s office there (branded the Canadian Real Estate Investment Centre).

Dan has a Bachelor of Commerce (Honours) degree from Queen’s University and is fluent in Chinese (Mandarin).

Founded in Vancouver in 1944, Macdonald Realty (www.macrealty.com) has grown to become BC’s largest full-service corporately owned real estate company, with over 20 offices, 1,000+ agents and staff in the province, and nearly $10 billion in annual sales.

In addition to residential sales, Macdonald Commercial has over 40 dedicated commercial agents with a head office on Burrard Street and a new Fraser Valley office in South Surrey; Macdonald Property Management currently manages over $5 billion in BC properties; and Macdonald Platinum Marketing has sold over $2 billion in luxury new construction.