Vancouver’s sky-high real estate prices are changing the shape of its retail districts – with pricey neighbourhoods feeling some pain, and formerly neglected pockets of the city getting a boost.

Several long-time businesses on the city’s expensive west side are either closing down or moving as retail strips transform under the pressures of rent and tax increases, redevelopment and a shifting demographic. The shopping strip along West Broadway, in the once-trendy heart of Upper Kitsilano, suddenly has vacant storefronts. Long-time shops are moving or shutting down.

“There is something wrong with West Broadway – an unprecedented number of businesses are closing their doors,” said Marion Jamieson, director of the Upper Kitsilano Residents Association. “I think the kinds of issues we’re facing in the residential areas of gentrification are also having an impact on commercial areas.”

Dunbar Lumber, at Dunbar Street and West 16th Avenue on Vancouver’s west side, has been operating at the location since 1935. Shafique Shivji ’s father took over the business in 1972 and paid $100,000 for the property. Today, the family is paying nearly that same amount in annual property taxes, which, Mr. Shivji said, is part of the reason they decided to sell to a developer, who plans on building a 19-unit residential building, with commercial space.

His climbing taxes coincide with Vancouver’s skyrocketing residential market over the last two to three years. Meanwhile, Mr. Shivji said his customer base has dropped off.

In 1972, Shafique Shivji’s family paid $100,000 for their Dunbar lumber business. Today, the family is paying nearly that same amount in annual property taxes. (BEN NELMS for The Globe and Mail)

As well, he said, his once-hopping weekend renovation business has dwindled. Young families who can no longer afford the west-side area of Point Grey have moved away, and many of the investor-owned houses sit empty, he said. And for seniors who know their older houses will get demolished as soon as they sell them, they don’t bother renovating.

As a result, Mr. Shivji said his lumberyard in nearby Ladner, B.C., is doing double the business.

“My weekend customer base has changed. It used to be chockablock full of people renovating and doing stuff on their houses,” he said. “That’s not the clientele living in this neighbourhood any more. They all either own new houses, or they don’t spend a penny on them.”

As a result, Mr. Shivji is relocating and downsizing from the 186-by-120 square-foot lumberyard to a location at West 13th Avenue and Arbutus Street. He’s trying out a new business model: a lumber store without the lumberyard. Instead, customers can place orders from a smaller retail store, and their supplies will be delivered. It means lower overhead without having to move far from his customer base.

“It’s the new Vancouver,” Mr. Shivji said, adding he has seen many other Dunbar shop owners move out. “I’ve seen changes around here since I was 12, and I don’t know if this is good.”

East side on the rise

But over on Vancouver’s more affordable east side, retail strips are experiencing a boost. Hipster restaurants, video production offices, and immigrant-driven beauty salons are just some of the startups creating vibrancy in gentrifying east-side neighbourhoods. A report by commercial real estate firm Cushman & Wakefield recently named the east side’s Main Street as one of the 15 coolest streets in North America. The only other Canadian street to place on the list was Toronto’s Queen Street West.

A study for The Globe and Mail by BTAworks analysts Mark Heeney and Andy Yan showed that the number of west-side businesses is dropping. For example, the number of Dunbar businesses fell by 8 per cent between 2011 and 2016. And retail businesses on West Broadway, between Alma Street and MacDonald Street, dropped by 10 per cent. However, moving east, businesses were on the rise, with an increase of 11 per cent in the heart of Cambie Street and 13 per cent on East Hastings Street, east of Nanaimo.

Number of businesses in various Vancouver neighbourhoods from 2006 to 2016 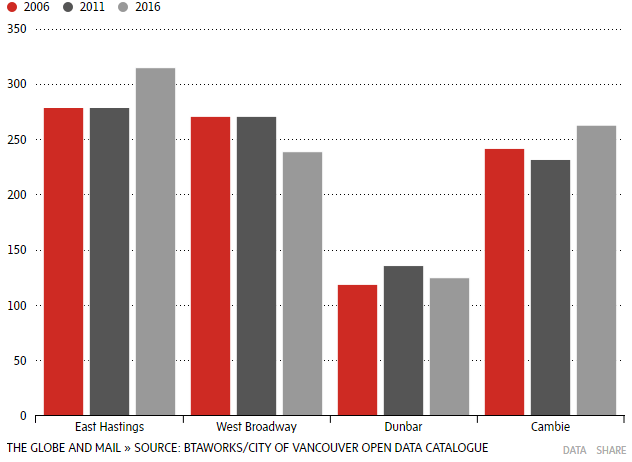 The reasons for the west-side’s decline are a combination of shop closings and the consolidation of retail spaces due to redevelopment, Mr. Yan said.

Generally, the total gross rent for a typical 1,000-square-foot space on West Broadway is about $75 per square foot, versus $45 per square foot for a space of the same size on the east side (for example, East Hastings), according to Tony Letvinchuk, managing director at Macdonald Commercial. Of that amount, about 18 to 22 per cent is for property tax.

Greater affordability on the east side is a huge draw for independent, new-concept retailers, and the young demographic they attract, he said. “It makes it more manageable for independent retailers to open up shop in those areas.”

West-side retail areas are under pressure from speculative market demand, similar to housing in the area. Nu Stream Realty, which specializes in marketing to clients from China, recently distributed flyers throughout the west side that said it has “lots of prospective buyers interested to invest in commercial properties.”

Mr. Letvinchuk has seen the pressures of real estate investment on retail. “Property taxes paid by Vancouver’s street-front retailers are definitely on the rise. Developers and investors often bid up the value of these properties, which, in many instances, are now effectively development sites with retail holding income.”

Adrian Beruschi, vice-president of the retail properties group for CBRE Ltd., said that “property taxes are ruthless” and “squeezing the mom-and-pop businesses.”

Migration to the city’s east side is taking away from the formerly youthful and now pricey west side, he said. Historically, the west side’s lush Point Grey area was the place to be for a retailer. A street like West 10th Avenue, close to the University of British Columbia, would have been desirable.

“I haven’t had a tenant say they want to be on West 10th Avenue in the last five years,” he said.

“When young families are moving [east], young entrepreneurs pounce on those new retail nodes and improve them. And if young families can’t afford to be in Point Grey, and populations there are not growing – and in fact are going the opposite direction – it’s inevitable that there’s going to be a shift,” Mr. Beruschi said.

“Retailers are following the population and the youthful neighbourhoods.”

Mom-and-pop shops on the move

Changing density and demographics are also transforming the character of shopping precincts.

On East Hastings, which saw the biggest increase out of all the study areas, the new businesses fell into the categories of quick-service restaurants, health-related stores (such as chiropractors), beauty shops (such as nail and hair salons), full-service restaurants and production companies.

On West Broadway, in Kitsilano, 61 per cent of the businesses that were lost belonged in the “retail dealer” category, such as hardware, electronics, books and toys. Gary Mussatto is the owner of the Toybox, a West Broadway institution that has been serving families there for 43 years. He had to move after his building and half a dozen others were demolished to make way for a mixed-use development with a big retail space. He figures only about half the mom-and-pop shops that were forced to close reopened again.

Mr. Mussatto eventually found another location in a new development nearby, but his space is smaller and his rent about 20-per-cent higher.

“Redevelopment is not easy for independent retail businesses,” he said.

He attributed some of his challenge to increased online shopping, as well as higher overhead.

“We’ve seen lots of people and close friends with businesses who were well established move out at the end of their lease, because the new rents weren’t sustainable for them. So they chose to either close or relocate.”

Long-time butcher Bernie McDougall closed his iconic Magee Grocery on West Boulevard last September. His landlord sold the building to a condo developer, so Mr. McDougall went to work for a bigger butcher.

After 45 years, he said he couldn’t abandon his regular customers.

“The little shops are disappearing because the city is charging way too much for taxes. That’s what was happening to me, but fortunately I had enough of a client base that would sustain me and keep me going and prospering, really,” Mr. McDougall said.

“You’ve got to do more business to pay way more overhead,” he said. “It’s getting tougher and tougher on the small guy.”

The article was originally posted on The Globe and Mail, July 9th, 2015. Written by Kerry Gold.